My Attorney embarked on a highly ambitious venture to the countryside to record their fourth album.  The plan was to track the material we had amassed as a proper band, which was now a clear step out from under the shadow of the LP 2/3 monoliths.  Although we still intended it to be a studio affair, we knew that the group had evolved from a songwriting team of the guitarist and singer, into something a lot more collaborative.  We also wanted to capture the live thrust of our recent gig performances. 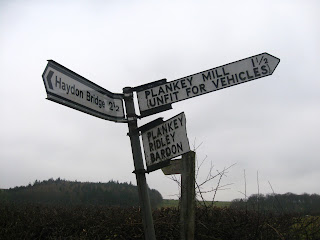 The romantic notion of holing ourselves up somewhere isolated, and sweating on the songs until they became well-hewn gems, really appealed.  So Ian went to sterling efforts to source a remote location that could house us all, without fear of intrusion by the General Public.  With five car loads of equipment, multiple copies of the King of Limbs and an out of date chicken, we headed off to the middle of nowhere.


Upon returning a week later, I remember being so exhausted that I was in a state approaching that of yer man out of East 17 after he ate all those potatoes and ran himself over with his own car.  By all accounts of the footage presented here, I don't appear to be very... well. 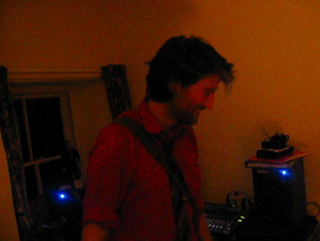 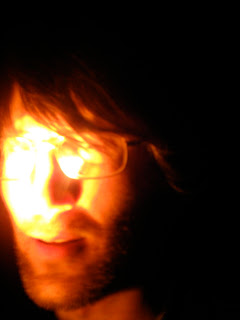 The main problem for me personally was that I was cast in the dual role of producer and singer.  It meant I couldn't concentrate on either role as comprehensively as I would have liked.  Vocals went unsung, lyrics left unfinished, and even when I was working with the others, production values were allowed to slip in the background.  It meant that while the others were busy nailing their takes, I felt left out of the creative process.  As someone who likes to perfect their performances, it was difficult to be happy with any spur-of-the-moment bits that I did manage to get down.  And there was no chance for noodling and fiddling around with synths and boxes; something I believed the record desperately needed if it was to fulfill the "weird pop" manifesto we had set ourselves.

Unlike everyone else, I didn't have any downtime to unwind.  Usually when a band is rehearsing the songs, and sound checking their gear, I can skirt the periphery, adjusting settings and speaking with the individual musicians about what kind of tone they want to achieve, or troubleshooting any potential problems (like tuning, clipping, bad monitor levels etc.) before they arise.  My hands are also free to sound proof amps, work out a running order of songs to attempt, keep an eye on the group's energy levels, coach people through their takes, and call it a wrap when I know the best take has been captured.  Since a singer is couched within this process, none of the above tasks can be carried out with any proficiency.  One should really just be behind the mic, demanding the bassist get you another slimline gin & tonic, standing in one's underpants "to ensure maximum tuning". 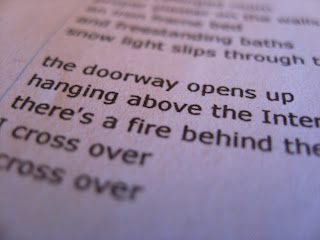 There also wasn't very much room; our haul of equipment was so comprehensive that it occupied most of the living space, as well as denying Andy a bed.  The cottage quickly came to resemble more of a workshop, rather than the nice kind of place you would recommend your retired parents try out on their fifth holiday of the year. 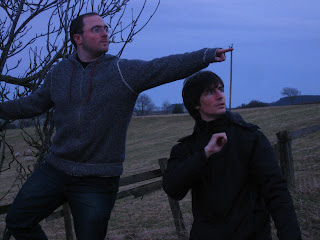 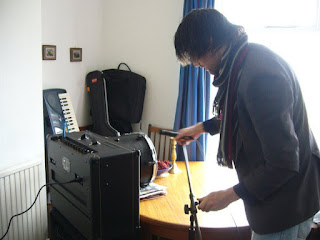 And so it came to pass that during those seven days I managed to: 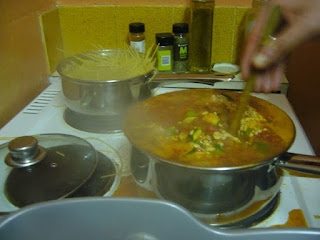 It is definitely one way to record an album.  Despite the difficult moments (I remember one particularly frustrating afternoon where Logic was giving us serious latency issues), there were plenty of fantastic parts.  It forced us to be very focussed, tracking on average three songs a day.  The whole experience of being in something together drew us all together a great deal; rehearsals conducted since February have felt much more like friends who share a great deal in common, rather than a collection of disparate elements that are striving for cohesion.  Cooking together and eating by the fire was always going to be lovely.  We explored the local area on long walks, chased sheep and collected firewood from the hedgerows.  The sunsets were epic.  And on the last evening we sat round the fire playing our favourite albums to one another, educating ourselves in the varying tastes of all the members' music collections.

The songs we tracked weren't half bad either, but much of that material is yet to see the light of day.  Blizzard Storm gives you half an idea of what we were up to.

[*it taught me never to give up on even the most futile of things, even if it seems beyond redemption, as the fire would later demonstrate to me when it sprang to life with a slammed door, after I had breathed into it for over an hour, but left to be sick outside from carbon dioxide poisoning, and the air crossing the room from my shutting the door had caused it to spring into an instantaneous inferno, bringing great joy and giddiness.  See @Ian_Leaf for details.]