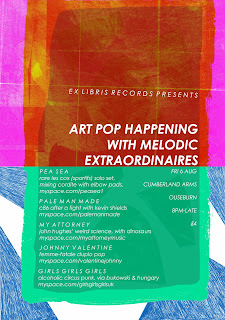 Another successful evening at The Cumberland Arms was conducted at the start of July:  My Attorney played with Silver Fox (who had the post-grad hipsters out in force, however they are well-deserving of all the attention they get), Pea Sea (from Les Cox (Sportifs)), Pale Man Made and Girls Girls Girls - who managed to arrive ten minutes prior to their stage time and conclude a suitably raucous evening.  There was even artwork on the walls from local artists: 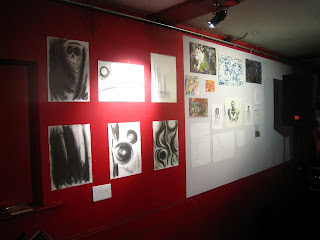 Sadly the reception  for My Attorney was cold, and it gave us the jitters.


Ian's cakes, however, came some way to making up for this. 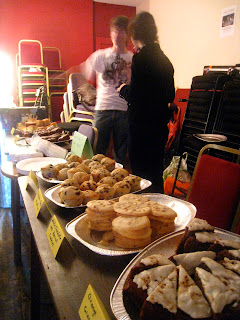 Using the visit from Gx3 to good advantage, a webcast was conducted.  Adrian didn't make it, and Gabor went AWOL "to look for the girls and the whiskey", so Jeremy did a valiant job of curating the set.  List below: 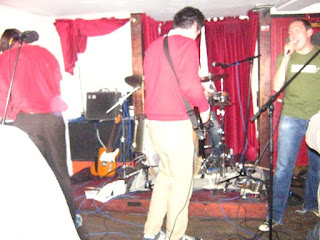 Then it was off to London, for a Blue Screem of Death performance at The Betsy Trotswood.  Hurried rehearsals.  Separate travel arrangements.  Gastric uncertainty.  However, eventual triumph came with a set that was as visceral and uncompromising as we had hoped it would be.  Ryan's contribution on guitar was sterling, and bought us some cover to hide behind.  The audience reaction was satisfyingly divided (echoing the opinions held by the band members themselves).  I then walked back to Battersea with my bass flight case, which is not something I would recommend. 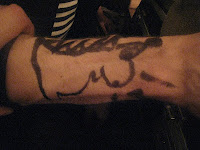 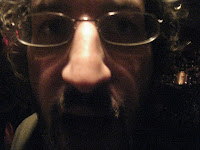 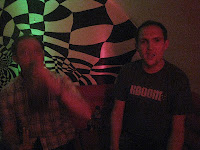 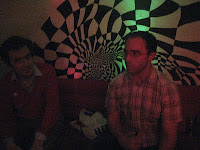 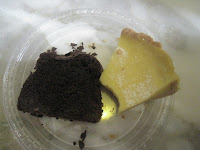 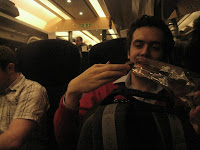 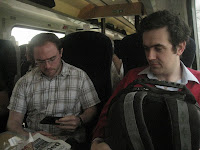 Later in the month Future Loss reconvened for a practice and recording session.  It marked the first time Alex and James had appeared on tape with Brian and me, despite being part of the live line up since the beginning.

Using the knackered and inexpensive Roots & Wings equipment, which was pushed beyond its limits by a frenzied, heatwave-induced performance, we captured our most lo-fi results yet.  The structures were improvised on the day, with everything laid down live.  The close mics gave a threadbare tone, without any gloss or sheen.  I was extremely proud of the results.  One track - yet to be named - featured ambient guitar feedback with freestyle drums.

Certainly a departure away from our old style of traditional rock-structures; and there's no going back. 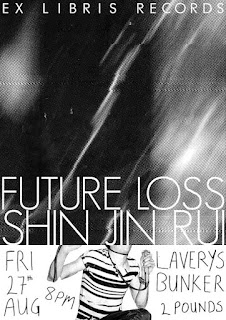 There was then a field trip to Belfast with Shin Jin Rui, for a show in Belfast at Lavery's Bar.  It was a great trip, with the lads visiting the Giant's Causeway, The Harbour Bar, a particularly hairy Eglinton lock in with a Hen Party, and a night's dancing at Auntie Annie's. 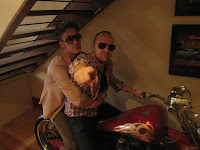 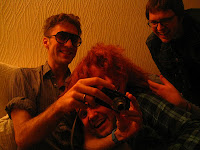 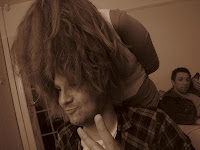 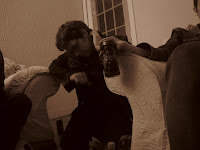 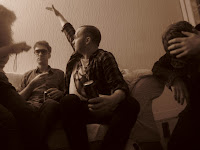 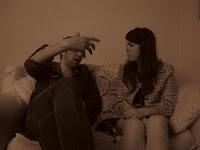 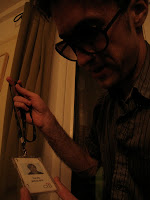 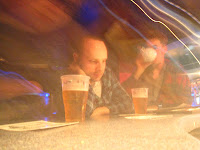 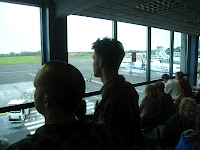 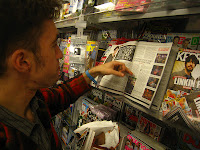 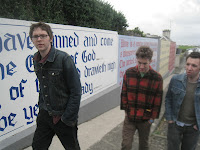 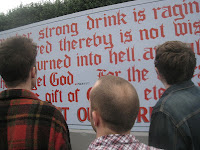 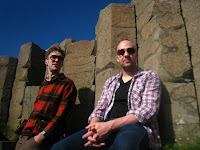 The turn out for the gig, however, was virtually nil.  It also marked the last time Shin Jin Rui would play in public before turning their attentions fully to other musical projects.  Ironically, Adam and the boys knocked it out of the park with a really carefree performance.