As part of this slow climb to the summit of 'Archival Status', I've given the Future Loss Soundcloud account a bit of an overhaul. 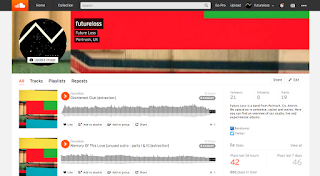 Before, it had been a depository of demos, works in progress, live recordings and extractions.  Most of those pieces have now been catalogued in proper albums, either in the form of the live album King Yeah Man, or the extractions album The Empire Never Ended, available from the band's Bandcamp page.

The unreleased curios record Keep The Commission will collect together the remaining outtakes and alternative versions, to ensure maximum documentation of all things ever done.

With this in mind, it felt like a better use of the Soundcloud space to present a general overview of the band's work.

I want the band to put its best foot forward when it comes to having an online profile.  So that when people stumble across the group online, they're met with a coherent summary of what the group was - and is - about.  And when they want to download something, or stream in greater detail, they can do so at the Bandcamp page.  It's something I hope to have for My Attorney and Ex Libris as a whole, too.

To celebrate me staying up until 3am uploading and tagging audio while watching Building Alaska on ITV3 and eating muesli with chopped banana, and then having to reupload audio because the files began or ended with a hard edit that needed to be faded in or out, and then having to purchase a Pro plan to enable me to replace the existing files on the profile, causing me to question my very existence on a profoundly spiritual level... the Soundcloud account now features an unreleased song, taken from the Pattern Magic / Summoner sessions.  It will be available to download in due course on the Keep The Commission b-sides/unreleased material album, but in the meantime can be streamed below.